Who are the effective members?

Local or regional associations active in at least 2 European nations, except when in one of such nations a national organisation is already an effective member. National associations of PPE suppliers with an establishment outside of the EU or the EFTA, with proviso that the specific acceptance conditions as stated infra be satisfied. Only one effective member shall be admitted per country.

Voting right:
Effective members have voting rights at the General Meeting (one vote per member) and may be appointed as Board Member.

Become a member:
The candidate members addresses their nomination to the president of the Board of Directors, who transfers it immediately to the other board members. Each of the members has the right to express a negative opinion within thirty (30) days after written notice and notified it in writing to the President. A candidate member for which no negative advice was released, becomes automatically provisional member after expiry of the period of thirty (30) days. The membership shall be ratified at the next General Assembly. If a negative opinion, the candidacy as an effective member will be deliberated at the next Board of Directors who takes a provisional decision on the admission as an effective member. The next General Assembly will finally decide on the refusal or approval of the admission as an effective member. At this General Assembly shall be at least two / thirds (2/3) of the members present or represented. The decision shall be taken by a two / thirds (2/3) majority. Until this meeting, the candidate-member will be a provisional member and membership fees are due.

Membership:
Effective members pay a membership that will be recorded yearly in the General Assembly 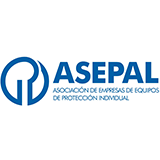 ASEPAL, Association of Personal Protection Equipment is the only national association in Spain that brings together the leading companies engaged in the design, manufacture and marketing of personal protective equipment, PPE.
The work carried out by ASEPAL focuses on:
• Awareness and awareness of the importance of using Personal Protective Equipment (PPE), and training for its correct operation.
• Information and guidance requested by any member of the association.
• Information and technical advice.
Since July 1989, ASEPAL has promoted and supported the development of legal norms and provisions aimed at guaranteeing occupational safety. Its companies undertake to market only certified products in accordance with Spanish and European regulations.

This email address is being protected from spambots. You need JavaScript enabled to view it. | www.asepal.es

Our association, which was founded in 1999 under the name of ISGIAD (Businessmen Association for Work Safety) and then changed its name to TIGIAD (Turkish Businessmen Association for Work Safety), creates a bridge between those who produce, import and market personal protective equipment and provide training and consultancy services for occupational health and safety. Our association is a non-governmental organization, which is headquartered in Istanbul and members of which are located throughout Turkey.

This email address is being protected from spambots. You need JavaScript enabled to view it. | www.tigiad.org.tr

The UK Safety Industry´s Lead Assosiation incorporating PPE Manufacturers, Safety Distributors, Notified Bodies and Test Houses, Safety Professionals, Manufacturers of Safety products that are not PPE and Manufacturers of products designed to protect the workplace environment. Involvement with enforcement agencies, involvement with legislation, representing members, creating accreditation and training packages, providing marketing platforms for member organisations, establishing networking events for members. The BSIF is the Lead Association in the UK for the PPE Directive/Regulations and is noted as a Competent Authority by the Health and Safety Executive

This email address is being protected from spambots. You need JavaScript enabled to view it. - www.bsif.co.uk

NSA - Nordic Safety Association
is an organisation gathering manufacturers, importers and distributors within the field of personal protective equipment and first aid systems in Sweden, Norway and Denmark . BPS was founded 1978 and has app. 40 active members. BPS has a close cooperation with different authorities and organisations with in PPE and is a natural speaking partner in their executive work. The main objective is to uphold a high standard, quality and service in the business The main objective i

ASIZ is the only organization in Russia uniting PPE developers, producers and suppliers. It was formed in 2001, now the Association consists of 92 companies from all over the country. Key goals of the organization: facilitation of interaction of the organization members with state authorities, assistance in the implementation of the state policy concerning the provision of employees with PPE, participation in the development of legal acts concerning both social policy and entrepreneurship, organization of exhibitions and consultations in the field of labor protection.

VVGW is promoting Health and Safety at work. VVGW is contributing to better European standards for PPE. VVGW is giving information about PPE to the user and educate PPE advisors.

Styl is the association of manufacturers, importers and  distributors of PPE and other safety equipment and safety experts in Finland.  Most important activities of Styl are to improve safety at work through high quality products and competent sales personnel. To organize systematic training of competent PPE sales personnel. To represent the interests of the trade toward authorities, notified bodies and other organizations. To follow and to influence development of legislation, standards and market control.

Synamap unites manufacturers and distributors of individual and collective protection equipment and materials, accident prevention equipment, and detection and first aid systems. Since 2004, its actions have also involved among others prevention officers, specialist consultants, and manufacturers of material used in equipments.

Assosistema is the Association for the Integrated Industrial System of products and services in Hygiene, Health & Safety market.
Assosistema is only Association in Italy for this sector and it is Confindustria’s direct member. 130 Associated, 1.164 millions of Euros is the turnover, 5 commodities sections, 3 main Markets (Health and Care, Hygiene, Safety). The mission of Assosistema is the economic growth of the sector and improve the quality of products and services. Give more visibility to the sector and takle unfair competition are the main aims of Assosistema.

Febelsafe is the Belgian Federation of suppliers and service providers for safety and wellbeing at work and during leisure time. Febelsafe transfers knowledge to the market in order  to increase the level of personal safety. Febelsafe stimulates the awareness of the need to protect people at work and in leisure time.  Febelsafe is also contributing towards the development of European Standards and to make sure they are applied correctly. Febelsafe is promoting new technologies and professional skills and proficiency.  Febelsafe is the forum between the user, the business world and national and European Governments.

Febelsafe vzw - Bavikhoofsestraat 190 - 8531 Bavikhove - Belgium
+32 56 70 11 03
This email address is being protected from spambots. You need JavaScript enabled to view it. - www.febelsafe.be

Do you want to have more information, don't hesitate to contact us: